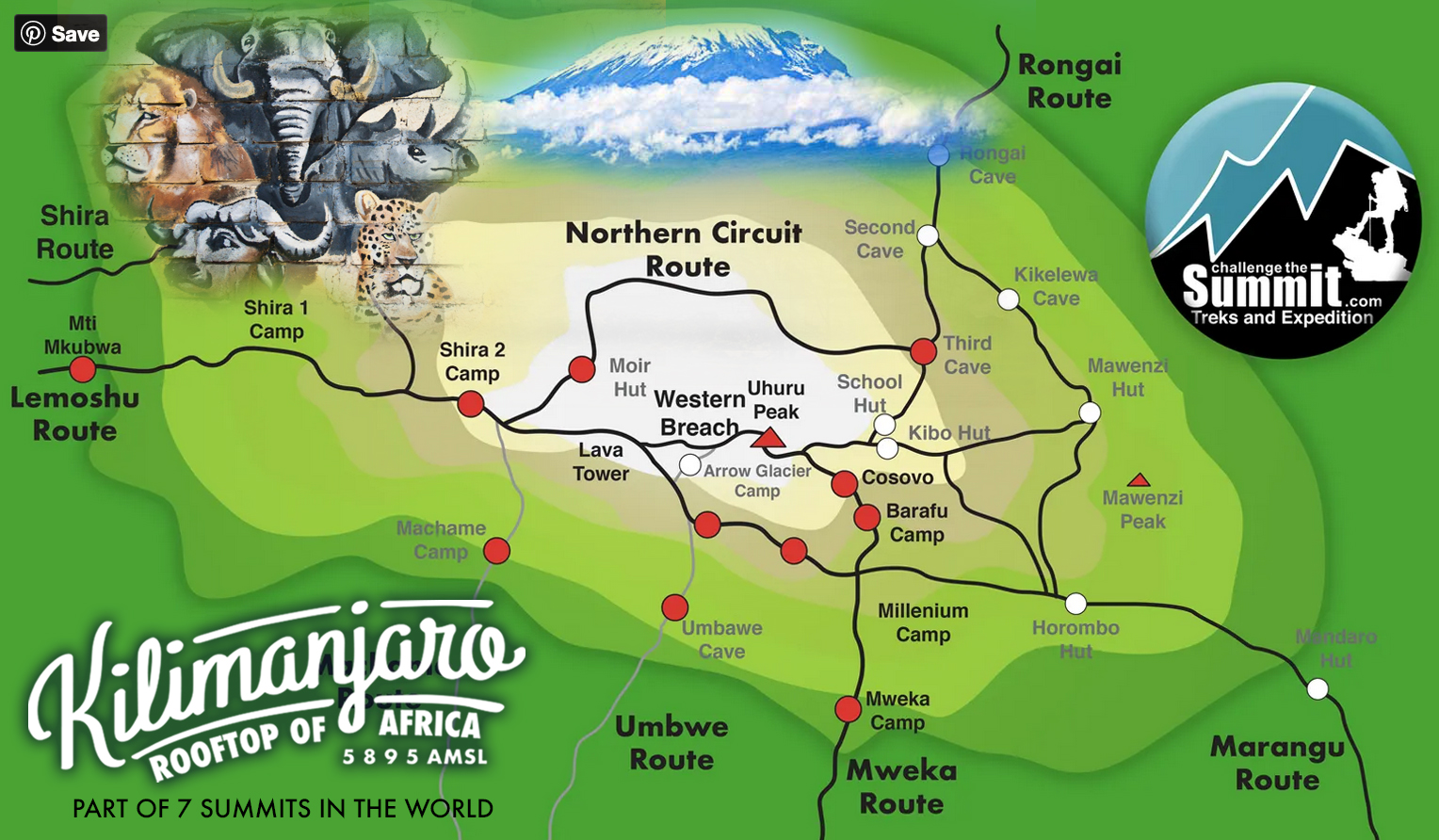 Mt. Kilimanjaro is a dormant volcano and it is one of the 7 highest peaks in the world, many people call it “the roof of Africa” because it is the highest mountain on the continent. Climbing Kilimanjaro will probably be one of the hardest, but also one of the most exciting things you will ever do in your life! It is challenging but also immensely rewarding!

There are 8 main routes up Kilimanjaro. Each one varies in terms of difficulty, traffic, and scenic beauty; and choosing the right one for you is a key part of the planning process. Timings depend on which route you choose, with hikes taking anywhere from 8 to 14 days (That will also include hotel accommodation and buffer days just in case bad weather. The routes with the highest success rate are those that take longer and ascend at a gradual rate, allowing climbers to acclimatize to the change in altitude.

1. The Marangu 10 days (Success Rate: 60%)
Distance: 70 km
Difficulty Level: Low
Only a quarter to a third of the climbers as this route is if I would be absolutely against sleeping in tents as Marangu offers huts accommodation. But then again, do not imagine you will have a bed and a shower there – it is a very simple mattress on the floor with no linen and 5-7 other people in the room.

2. The Machame 9 days (Success Rate: 75-85%)
Distance: 62 km
Difficulty Level: High
Machame route is arguably the most popular route in Mount Kilimanjaro. It offers a scenic route with steep slopes and challenging terrains. The route approaches Kilimanjaro from the south and descends via Mweka route, a route in the mountain that is used only for going down.

3. The Rongai 8 days Route (Success Rate: 60-70%)
Distance: 81 km
Difficulty Level: Low
The easy but more expensive, it offers great views and there are not as many people on the trail. This is the best route to see a bunch of large wildlife like antelopes and elephants during the first days

4. The Shira 11 days (Success Rate: 60-65%)
Distance: 56 km
Difficulty Level: High
This route is very similar to the Lemoshu route, on first day you will travel by 4×4 car and then only less than an hour trek.
But this one catapults you to some serious altitude on the first day.

5. The Lemosho 11 days (Success Rate: 85-90%)
Distance: 67 km
Difficulty Level: Low-High
Considered one of the ‘easier’ climbs because of it’s great acclimatization profile. It has great ‘climb high, sleep low’ opportunities. Put simply, with the right Kilimanjaro preparation anyone can climb this route. It is also less crowds, a beautiful scenery and a high success rate but high cost.

6. The Umbwe 9 days (Success Rate: 40-50%)
Distance: 53 km
Difficulty Level: Very High
The most difficult and demanding route on Kilimanjaro, and the most spectacular.
Just to give you an example – Umbwe climbers reach Barranco camp on day 2; when I took Kilimanjaro Machame route I reached it on day 4. So, as you can see, the climbing will be quite tough.

7. Western Breach Route 13 days (Success Rate: 75-80%)
Distance: 52 km
Difficulty Level: Very Very High
The most challenging and but very beautiful views in all trails. Also by far the most dangerous way to scale Kibo and reach Uhuru Peak. The danger lies not in the climb itself, many climbers died because of the melting glaciers above the route and others are died in sleeping because of AMS (Acute mountain Sickness). It was closed since 2011 but in 2019 they open again the route.

8. Northern Circuit 14 days (Success Rate: 90-95%)
Distance: 96.5 km
Difficulty Level: Low
The Northern Circuit route is the longest and newest route in Kilimanjaro. It approaches the mountain from the west and offers a breathtaking almost-360-degree view of the rarely visited northern slopes. This route promises the highest success rate and also has the most acclimatization rate.

Signup for our newsletter and get notified when we publish new articles for free!